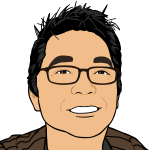 I am not much of a cartoonist, but I always seem to have these conversational “sketches” rolling around in my head. I can trace it back to my early years when I wanted to be an impressionist like Rich Little, Frank Gorshin and David Frye. I remember reciting monologues from David Frye’s I am the President record (and not understanding what I was saying or why it was funny).

Later, it was probably Monty Python that had the biggest impact on me. If you think about Python, many of their sketches are just dialog and just as funny on their records.

My brother and I put together a Python-esq tape of silly skits for a friend of ours who was taking the CPA exam. It was called the Scott Good Luck Tape. It’s probably 30 years old now and the humor has been passed on to our children and friends. When I hear or think of some of the bits we did, I find it hard to believe we were so clever.

Anyways, I hope to immortalize some of these random sketches as animations and upload them to this site for everyone to enjoy or ignore. The choice is yours.